A well regulated militia, being necessary to the security of a free state, the right of the people to keep and bear arms, shall not be infringed.

OK, so let’s read it and discuss the key words and phrases here.

Lots of anti-gun people like to insist that this means that the Government is allowed to regulate this right, and the regulation (laws) is part of this requirement. I have no clue where they get this perception as the Bill of Rights and the Constitution pretty much are used to reserve rights for the citizens of the US.

The Random House College Dictionary (1980) gives four definitions for the word “regulate,” which were all in use during the Colonial period and one more definition dating from 1690 (Oxford English Dictionary, 2nd Edition, 1989). They are:

1) To control or direct by a rule, principle, method, etc.

2) To adjust to some standard or requirement as for amount, degree, etc.

3) To adjust so as to ensure accuracy of operation.

1690 Lond. Gaz. No. 2568/3 We hear likewise that the French are in a great Allarm in Dauphine and Bresse, not having at present 1500 Men of regulated Troops on that side.

militia – a body of citizens (no longer exclusively male) eligible for service where full time duty is required only in emergencies. The term also refers to the eligible pool of citizens callable into military service.

US Code – Militia: composition and classes

(b) The classes of the militia are—

(1) the organized militia, which consists of the National Guard and the Naval Militia; and

Then, we also have three major cases decided by the Supreme Court:

While the case was about the National Firearms Act, and the Supreme Court upheld it as being Constitutional. The court found that:

In this case, found in favor of Heller, the Supreme Court found that:

the comma – There are three different commas here, but it is the last one that causes some dissent.

Anti-gun proponents argue that the last comma is intentional and was intended to make militia the subject of the sentence. Accordingly, they look at the sentence as basically being:

“[a] well regulated Militia … shall not be infringed.”

However, based on the Federalist papers and the actual votes and proposals for the wording, the operative words of the sentence are as follows:

“the right of the people to … bear arms … shall not be infringed.”

Using this sentence, it is clear that there is a personal right of the people to own firearms. Reviewing the History, the Federalist Papers, and the Indeed, the historical backdrop—highlighted by a general disdain for professional armies—would seem to support this theory.

The History of the 2nd

And that the said Constitution be never construed to authorize Congress to infringe the just liberty of the press, or the rights of conscience; or to prevent the people of the United States, who are peaceable citizens, from keeping their own arms.

The draft provided in the first session of the first Congress:

The right of the people to keep and bear arms shall not be infringed; a well armed and well regulated militia being the best security of a free country; but no person religiously scrupulous of bearing arms shall be compelled to render military service in person.

Amended version brought forth by the select committee on the Bill of Rights:

A well regulated militia, composed of the body of the people, being the best security of a free State, the right of the people to keep and bear arms shall not be infringed, but no person religiously scrupulous shall be compelled to bear arms.

Draft version of the Second Amendment sent by the House of Representatives to the United States Senate:

A well regulated militia, composed of the body of the people, being the best security of a free state, the right of the people to keep and bear arms shall not be infringed; but no one religiously scrupulous of bearing arms shall be compelled to render military service in person.

Note: When the Amendment was transcribed, the semicolon in the religious exemption portion was changed to a comma by the Senate scribe.

Revision voted on in the U.S. Senate:

A well regulated militia, being the best security of a free state, the right of the people to keep and bear arms, shall not be infringed

Final version passed by the U.S. Senate; the phrase “necessary to” was added when the proposed Amendment was entered into the U.S. House journal.

A well regulated militia being the security of a free state, the right of the people to keep and bear arms shall not be infringed.

Of course, sometimes it takes some good comedians to explain it best, so let’s leave it to Penn and Teller. 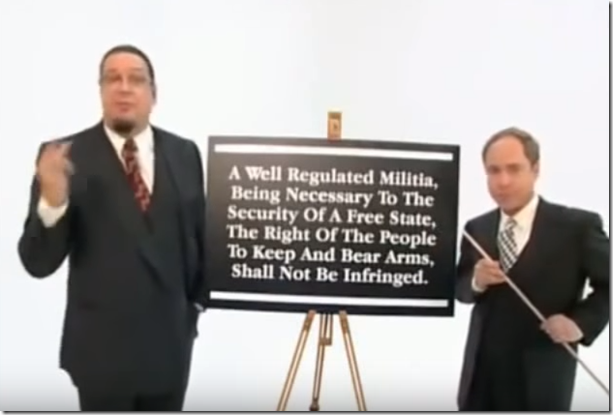 Basically, when you do the research, it is pretty clear what the intention was of our Founding Fathers. Their intention did not include:

If I were to translate the amendment into current English, it would probably look something like this:

Because we need a well trained militia to ensure the security of a free state, free citizens must have the right to keep and bear arms.