Disclaimer – I am not a lawyer. I don’t pretend to be one. I don’t want to be one.

I often read questions on forums, and am asked by students, around whether it is OK to modify an every day carry (EDC) handgun, also known as a carry gun that is either carried openly or concealed. I see many people jump up and say that it can be held against you in court and your gun should remain completely stock. The other side responds by asking for any court case where it has been a factor in a justified defensive shooting. I am in the latter group as there is no case where a justified shooting has turned into an unjustified shooting because of a gun modification.

Some of the common modifications made to a hand gun include the following (I am certain that I missed some of the more common ones):

Most of the time, the question has to do with trigger jobs or replacement triggers and changing the weight of the trigger. Of course, there are also questions regarding other modifications that are functional or cosmetic. In any case, it is about whether any of these modifications will have an impact on your case in the event you are involved in a defensive shooting. Since the trigger is the main one, and the most discussed, let’s start off with a couple of definitions and focus on the trigger for the rest of this blog, even though it applies to all modifications. 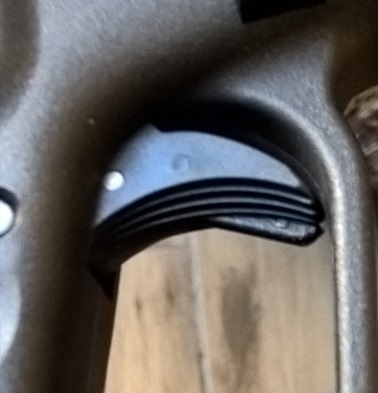 Replacement Trigger – There are many great third party companies that

make their own trigger, and complete kits that include replacement springs, that can be used to completely replace the stock trigger and components. I won’t even try to list them all as it would take a pretty long time. You can research the different options and read reviews for each of them, and you will find that some vendors have much better reputations based on the quality of their parts and their support.

What am I allowed to do, and what would be the impact on my case in the event I am involved in a defensive shooting?

As always, the answer is, “It depends.” In the vast majority of the cases, it won’t make any difference whatsoever in your case. The reason is that your modifications, functional or cosmetic, have nothing to do with whether you violated a law or whether you violated a person’s rights. The “it depends” part is whether you have a competent lawyer that understands how to respond to a prosecutor or plaintiff’s lawyer that tries to influence the jury by trying to make a modification into an issue when it is not an issue. A good lawyer will object to any mention of such modifications as they are not relevant.

If, let’s hope it doesn’t happen, you must draw your gun and shoot an attacker, there are some possible repercussions. You can, and most likely, will be arrested, and you might be charged with one of the following (I am going to use Colorado law as I am pretty familiar with it):

Murder in the First Degree – There are three elements to be convicted of this charge. They are:

Manslaughter – The difference between Murder in the Second Degree and Manslaughter is that in Manslaughter, the act is not knowingly committed, but it is committed recklessly. In other words, there is no intent, but there is negligence.

Others – There are other charges where the attacker lives, and it becomes attempted murder or other lesser crimes.

Choice of Evils – The Choice of Evils allows people to engage in what would normally be an offense (like Assault in the First Degree or Murder in the Second Degree) to prevent another offense from harming us or third parties.

Use of Physical Force in Defense of a Person – In cases where a person reasonably believes that the imminent actions of another person may cause death or great bodily injury, then you are allowed to use physical force, and even deadly force is allowed.

In all of the above possible charges, you will not see any place where the tool, the handgun, has been modified in any way as part of the equation will impact the defense against any charges brought. In fact, there is no place in any of the laws that you would likely be charged with that have any element associated with the defense tool used being modified.

In you intend to pull the trigger, and do so, and the gun goes off like it is supposed to, then any legal standard for charges brought against you will not apply to any modifications of your handgun. Even if a prosecutor brings it up, your qualified defense lawyer will shoot it down (pun intended), and the judge will also back up your lawyer as it isn’t relevant. In the worst case where a jury might hear that you made changes to your gun, it can be addressed in further questioning, and the judge will make it clear what the jury is supposed to consider when the judge provides the jury instructions on what is required to convict you of any charges brought by the prosecution. The jury instructions are clear in that they define the elements that must be proven in the case.

Yeah, there is usually a “however” in these discussions. In this case, we need to understand that if we make changes that impact the safety of a handgun that we use, and it causes a negligent discharge, then we will be held liable for any death, injury, or damage to property that is caused by that negligent discharge.

As soon as you say, “I didn’t intend to shoot…” then the modifications to your handgun are very much in play. You just did something that was negligent. You will pay the consequences.

Please understand that if you make changes that impact the safety of your handgun, and your gun goes off when you don’t intend it to go off, then you will be liable. You can protect yourself, though.

Do not modify your handgun. If you don’t screw with it, and something happens that is beyond your control (i.e. you drop your gun, and the drop safety fails because of its design), the manufacturer will be held liable.

Use Qualified Gunsmiths – Of course, if you are going to have some work done that will change the gun from its stock configuration, use a qualified/certified gunsmith. Don’t do it yourself and take on the liability of you making a change that might impact the safety of your gun. Liability is why you will never see a gun manufacturer support third party components.

Follow the Four Safety Rules – Jeff Cooper’s four rules have become universal because they make great sense. The community, overall, has accepted them and they are taught all of the time. In the case of a trigger, Rule 3 is huge. Keep your finger off of that trigger until you are ready to activate the trigger and shoot.

Train – Take training classes, and document your training. If you say that you were taught “in this situation, you should…” you need to be able to say who taught you that and when. For example, I have been taught that when the attacker is wearing body armor or some kind of explosive vest, I should take head shots. If such a situation came up, and I was questioned on it, I can easily show that I was taught by qualified people and they can verify and back up my training.

Be able to Articulate Your Modifications – Understand why you have had others make modifications to your handgun and the value of those modifications. For example, if you can clearly state that the trigger was modified because the new/modified trigger is crisper and smoother and results in you being more accurate and less likely to shoot an innocent bystander, that will make a difference if it is ever brought up.

Please review the following links. They may be valuable to you in your decision making when it comes to modifications to your every day carry handgun.